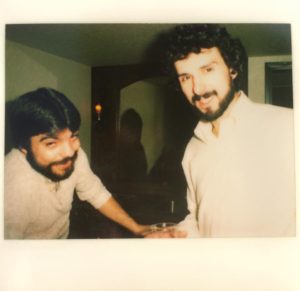 On the 33rd birthday celebration of his dear friend Charlie Mugavero, Tony Mazzola got the attention of all of the customers in the gourmet restaurant, Rich and Charlie’s, and had them all sing and celebrate. This would be the last time that Tony would see his beloved friend and mentor. Shortly after, Charlie “Mungo” Mugavero would die in a plane crash alongside his wife and 36 others.
Tony Mazzola would go on to honor his friend’s legacy by opening several restaurants under the name “Mungo’s.” There have been several locations in the past, but Mungo’s, the ninth location since 1983, is currently located at 100 E Main Street in Collinsville, IL.
“I just want to make Mungo proud,” Tony comments, “It’s not about the money, it’s about making good food.”
Mungo was the man who helped Tony get into the business.
“I was a busboy when I was 14 years old. Mungo took me under his wing. He said to ‘work with me.’ He taught me how to make a salad in front of people when I was just a 14 year old kid. He taught me everything I needed to know about the art of fine dining.”
As a teenager, Tony followed the advice given to him by Mungo, which helped him to learn and understand the business.
“Keep your mouth shut and your ears open.”
To Mazzola, Mungo’s isn’t his job. It’s his life. At the young age of 21, Tony was running the restaurant “Rich and Charlie’s” with 38 employees under his tutelage. After Mungo (Charlie) died, he wasn’t able to secure the position that he was promised.
Mungo was not the only loss that Tony had to endure. He lost another friend and chef Chris Castiglioni. Castiglioni had a disease that caused his bones to be weaker and more brittle than normal.
“He fell down the steps in his mother’s basement, and died of complications,” Mazzola emotionally recalls.
To honor his fallen friend, there is a dish on the menu that shares his name. The dish is called Shrimp Castiglioni.
Not only has Mazzola lost friends, but his work also took a toll on his marriage because of how often he was working.
“It’s a tough business,” Mazzola comments, “A lot has happened. They took my heart, but they’ll never take my soul.”
Regardless of all of these setbacks, Mazzola has never faltered in his efforts to maintain a high standard and create a unique dining experience.
“I’m here seven days a week. I wouldn’t do it if I didn’t love it.”
One of Mungo’s signature dishes is the Beef Tony, which is a tenderloin, charbroiled, topped with creamy provel cheese sauce, fresh mushrooms and chopped green onions.
Mungo’s proudly uses the slogan “Often imitated, but never duplicated.”
“Despite other businesses trying to take me out, I never view this restaurant as having competition,” Mazzola remarks, “We will never budge on the quality of our food. We only use the best and the freshest ingredients. The only competition that we have is our last dinner. We always want to improve what we do and provide the best food and service for our customers. That’s how we prove ourself. That’s why other people will never be able to do what we do.”
The salad is what Mungo’s is most widely known for. In fact, this particular interview was put on hold, while somebody came in just to see when the restaurant opened, remarking about how spectacular the salad was.
“It’s my own recipe,” Tony gladly says, “I actually came up with it 20 minutes before my restaurant opened in 1983. People love it!”
Loyalty is also something that Tony values. One of his employees, Charles, has been there for over thirty years. It is evident that people notice this, and always compliment his spectacular service.
Tony Mazzola is a man who is passionate about what he does. His goal when you walk into Mungo’s, is to provide amazing service, delicious food, and an overall unique and personal dining experience.
Mungo’s is located at 100 E Main St. in Collinsville, IL. To make a reservation today, call (618) 632-6864.

As a family-owned business, Mungo’s Italian Eatery has proudly served the best Italian fare around since 1983. Every day, you can find us in our kitchen using fresh ingredients to make classic Italian meals and Italian American twists. Try a handmade pasta dish, or sip on a glass of wine. Whether it’s date night, a family gathering, or an outing with friends, we’ll make sure it’s an experience you won’t soon forget.

Great replacement for going to St. Louis or the Hill for outstanding Italian food and service. No complaints at all and was actually pleasantly surprised with much we enjoyed the visit. Highly recommend. Recently had Joey B’s on Hampton and left disappointed. This blows it away.

Have always has such an amazing time here. The food is always amazing and the staff are so friendly. The best around and definitely will be back.

Amazing meal. The food and service are excellent. Will definitely be back again